A forum for owners and admirers of Harley's greatest.

No Art, we mean your XR not your arse
Show us your bike and tell us what you've done to it, we love that stuff
Post Reply
7 posts • Page 1 of 1

since I was a teenager, I always liked Flat Track motorcycle racing, I was fortunate to live within a couple of hours of some small 1/2 mile and 1/3 mile tracks where I would spend most Saturday evenings watching the racers wiz by at some phenomenal speeds. Once a year, in September, we would drive the 5 hours it took to get to Syracuse, New York where there was a 1 mile track and all the big name racers would come in their quest for the AMA number 1 plate, guys like Jay Springsteen, Scott Parker, Chris Carr would run, inches apart going 120 miles an hour, It was great fun for us.

I always said I wanted an XR750, but one that was street legal, It had to have Lights, a horn and most importantly Brakes. In 1983 the Motor company introduced the XR1000, I just had to have one, My Brother and I, and a few friends loaded up my 1980 Dodge van, and we drove down to Florida to pick up my new Bike. Here it is the day I picked it up, don't forget...this was 33 years ago.!!

I've tried to keep it in good condition over the years, the only thing I've done to it, besides oil, batteries and tires, is a screaming eagle fork brace, a steering damper from Storz performance, and the Harley racing mufflers. It still runs good, had it out a few weeks ago, but it really is like driving an old tractor, it still brings a smile to my face when I get to ride it, Here is how it looked a couple of months ago

In 2008, I saw the XR1200 for the first time, but we couldn't get them here in the USA as they were for sale in Europe only for the first year, But in September of 2009 I finally was able to get one in, of coarse, in Fast Mirage orange Pearl. Here it is the day I picked it up.

After my first ride, I knew a few things had to be changed, I couldn't live with the stock seat, and I thought the stock 09 suspension was severely lacking. I started to modify a few things every year, First I installed the X suspension and noticed a big improvement, the later on went to the Ohlins rear 852's and had the Andreani piston kit and Ohlins springs and fluid done to the front BPF forks, now it works the way I want it to.

That about covers it folks, two more shots of Big Brother and Little Brother together, Thanks for looking!!

Brilliant Roy, love seeing the XR1000 again, it doesn't look that different to the new XR really. . . . if you squint slightly.

You need to get a picture of it with you in front of the dealer similar to the original one, now that would be a contrast.
After me you're first

Lovely bikes Roy a credit to you mate
Top

Well, Well...Hope everyone is OK out there, its been more than 5 years since I posted the last pictures of my most recent upgrades. A lot has happened since then, I lost a couple of dear friends to Covid, and I've had other priorities that came before doing anything to my 2009 XR1200.
I've had the bike for more than 11 years now, and I've think I'm finally getting it to where I want to be with it.

Since my last photos in 2015, I have installed the twin motorcycle triple trees with the -1.5* offset, making turn in a little easier, installed a matching set of Marchesini aluminum wheels, 17" in front with a new Pirelli tire and a front fender from the Vance &Hines race kit, installed a set of Bubs exhaust pipes and mufflers, and the rearsets from Storz performance.

Picture of the rear wheel installed. 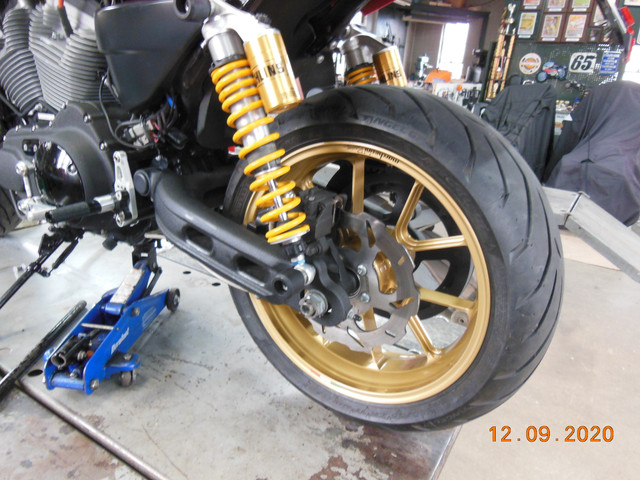 here is one showing my set of Supertrapps have been removed, the brackets for the Bubs installed, and the required Storz brake kit with provisions for the brake master cylinder to be relocated. 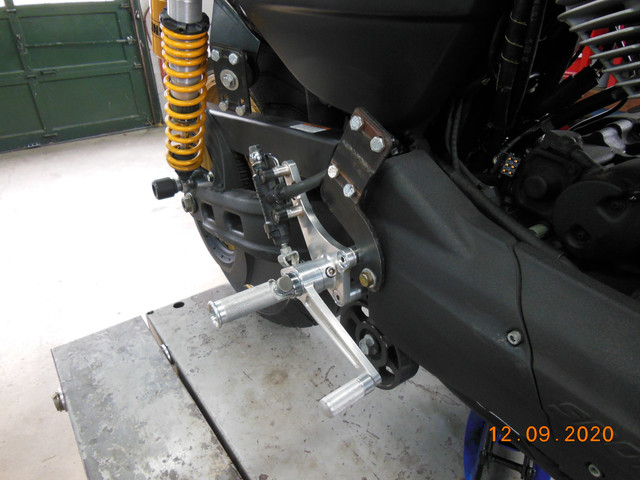 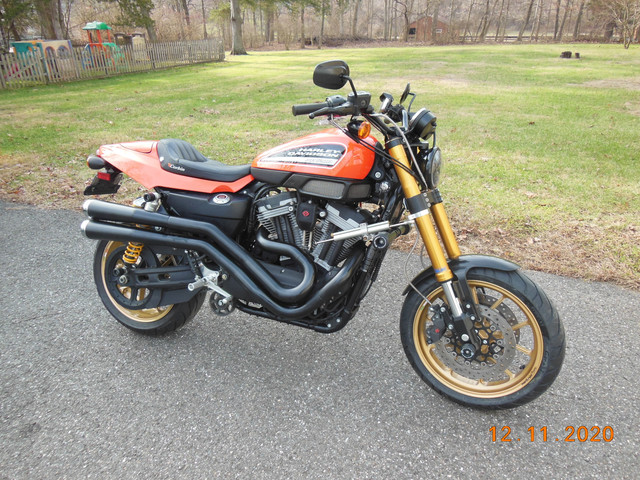 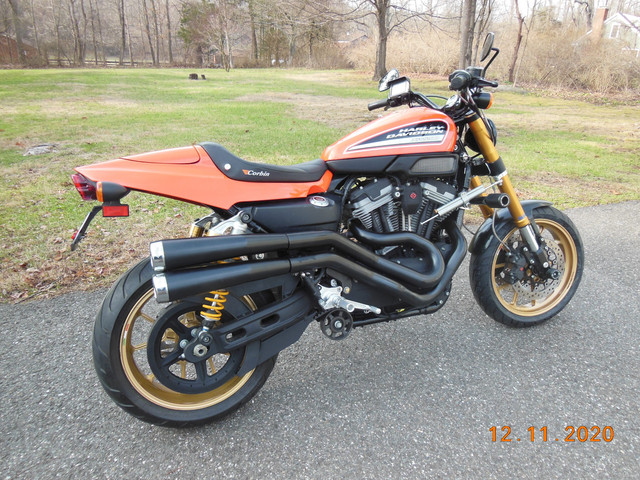 hopefully this short video will show up, just idleing, still needs to be tuned, i have to install my belly pan, and possibly paint the front fender, but I think i'm done for now. Thanks for looking, one comment about the Bubs....they sure are LOUD!!!

Your bike looks stunning and is a credit to you, one of the nicest i've seen, thanks for showing us!

Stay safe out there

WOW Roy, that looks really cool. you have done soem large scale mods to the XR.

The more I keep looking here the ore I keep thinking about gettting another one. .. . . but I like my FB especially now its stage 2'd.

Maybe I can convince her that I need one for a "lockdown" project?
After me you're first

Return to “Show us Yours”

Users browsing this forum: No registered users and 5 guests